The LC 2012 is our basic Spatial Light Modulator system based on a translucent liquid crystal microdisplay with a resolution of 1024 x 768 pixel (XGA). The device is mainly intended for proof of concepts and education.

Based on a twisted nematic (TN) liquid crystal display simply phase mostly modulation is possible as the twist always causes a coupled polarisation effect (amplitude modulation). The SLM provides a phase shift of about 2 π at 450 nm, about 1.8 π at 532 nm and around 1 π at 800 nm.

The microdisplay and drive electronics are packaged into a compact box for easy integration into optical setups. The LC 2012 is addressed using a standard HDMI interface and brightness and contrast settings can be performed using an USB interface. The LC 2012 Spatial Light Modulator can be used for phase (phase mostly) or amplitude modulation applications dependent on the configuration. The mode depends on the incident polarization and polarizer-analizer settings. 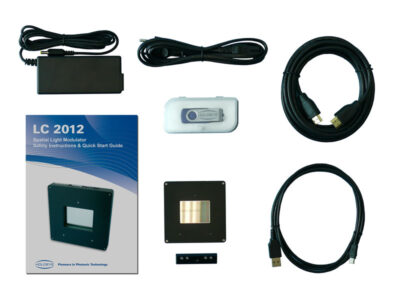 The LC 2012 spatial light modulator devices can simply be addressed like an external monitor using the standard DVI / HDMI interface of the graphics card. No additional software or dedicated hardware is needed to operate the SLM.

In addition a HOLOEYE SLM Pattern Generator Software is provided with the device. Key features of which are:

Besides that a special SLM Slideshow Player Software comes with the device. Also an SLM Display SDK is available for download which provides APIs (Application Programming Interface) for different programming languages to show images and data/ phase arrays directly on a HOLOEYE Spatial Light Modulator: