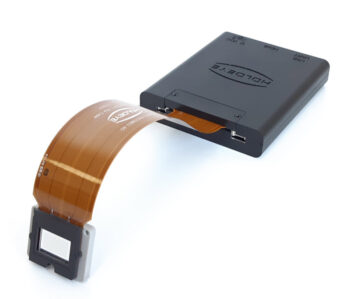 We just released a major update for LETO Phase Only Spatial Light Modulator series. The LETO-3 SLM has a resolution of 1920 x 1080 pixels with 6.4 µm pixel pitch. The new driver features a faster pulse addressing frequency which provides a higher dynamic range for addressing voltages. With an adjusted drive sequence and configurations the phase stability was further improved and with that, the diffraction efficiencies could also be enhanced. END_OF_DOCUMENT_TOKEN_TO_BE_REPLACED

“Perfect vortex beam (PVB), whose ring radius is independent of its topological charge, play an important role in optical trapping and optical communication. Here, we experimentally demonstrate the reconfigurable double-ring PVB (DR-PVB) generation with independent manipulations of the amplitude, the radius, the width, and the topological charge for each ring. Based on complex amplitude modulation (CAM) with a phase-only spatial light modulator (SLM), we successfully verify the proposed DR-PVB generation scheme via the computer-generated hologram. Furthermore, we carry out a quantitative characterization for the generated DR-PVB, in terms of both the generation quality and the generation efficiency. The correlation coefficients of various reconfigurable DR-PVBs are above 0.8, together with the highest generation efficiency of 44%. We believe that, the proposed generation scheme of reconfigurable DR-PVB is desired for applications in both optical tweezers and orbital angular momentum (OAM) multiplexing.”

“Registration and reconstruction of high-quality digital holograms with a large view angle are intensive computer tasks since they require the space-bandwidth product (SBP) of the order of tens of gigapixels or more. This massive use of SBP severely affects the storing and manipulation of digital holograms. In order to reduce the computer burden, this work focuses on the generation and reconstruction of very large horizontal parallax only digital holograms (HPO-DHs). It is shown that these types of holograms can preserve high quality and large view angle in x direction while keeping a low use of SBP. This work first proposes a numerical technique that allows calculating very large HPO-DHs with large pixel size by merging the Fourier holography and phase added stereogram algorithm. The generated Fourier HPO-DHs enable accurate storing of holographic data from 3D objects. To decode the information contained in these Fourier HPO-DHs (FHPO-DHs), a novel angular spectrum (AS) technique that provides an efficient use of the SBP for reconstruction is proposed. Our reconstruction technique, which is called compact space bandwidth AS (CSW-AS), makes use of cylindrical parabolic waves that solve sampling issues of FHPO-DHs and AS. Moreover, the CSW-AS allows for implementing zero-padding for accurate wavefield reconstructions. Hence, suppression of aliased components and high spatial resolution is possible. Notably, the imaging chain of Fourier HPO-DH enables efficient calculation, reconstruction and storing of HPO holograms of large size. Finally, the accuracy and utility of the developed technique is proved by both numerical and optical reconstructions.”

“Holographic stereogram (HS) printing requires extensive memory capacity and long computation time during perspective acquisition and implementation of the pixel re-arrangement algorithm. Hogels contain very weak depth information of the object. We propose a HS printing system that uses simplified digital content generation based on the inverse-directed propagation (IDP) algorithm for hogel generation. Specifically, the IDP algorithm generates an array of hogels using a simple process that acquires the full three-dimensional (3D) information of the object, including parallax, depth, color, and shading, via a computer-generated integral imaging technique. This technique requires a short computation time and is capable of accounting for occlusion and accommodation effects of the object points via the IDP algorithm. Parallel computing is utilized to produce a high-resolution hologram based on the properties of independent hogels. To demonstrate the proposed approach, optical experiments are conducted in which the natural 3D visualizations of real and virtual objects are printed on holographic material. Experimental results demonstrate the simplified computation involved in content generation using the proposed IDP-based HS printing system and the improved image quality of the holograms.”